You can go a month or more of ordering a different dessert and still not get bored with the options. You only need to scan social media feeds and food listings to know where to chase a car selling cookies; to plan a picnic at a farmer’s market piled with fresh fruit popsicles and Old Monk salted caramel sauce; or to chart a dessert trail in Bandra, stopping for porcini ice cream at Salt Water Cafe, for pizookie (a pizza-sized topped cookie) at Polpo, for paan kulfi at Pali Bhavan, and for passion fruit macaroons at Le15. Alternatively, you can schedule a quick after-dinner walk from Fort to Colaba, for mulberry baked yoghurt at The Pantry, for raspberry caramel pralines at La Folie, for white chocolate and pistachio ravioli at Cheval, and for Baileys cheesecake with espresso shortbread and Jameson ice cream at Ellipsis. 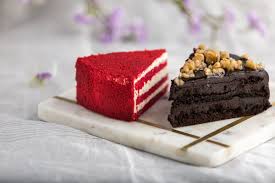 Last year, around this time I was planning a trail for my dad – a man who would gladly eat dessert for dinner every time – and I had only a fraction of the options I have now. Dessert wise, it’s been a good year even for people who are not sweet of tooth (or like me who need to neutralise their palate with something salty after dessert), because a few chefs in the city are starting to treat the sugar in sweets the way they treat salt in savoury dishes: as an element that binds other flavours together without dominating them. Some folks are even salting their desserts to temper the sweetness.

I wouldn’t go as far as to say that it’s a Renaissance of the last course yet. (It’s a hungry market for certain. A new pastry shop seems to open every month, but most of them are merely mediocre.) However, given how restaurateurs and chefs handling new openings have been so risk-averse lately, the fledgling spirit of innovation in desserts has been relatively heartening and perhaps even somewhat exciting. A few restaurant pastry chefs, home bakers, and speciality shop owners are taking wilder chances. For those of us weary of standard chocolate desserts, we get it now in astonishing textures like gel and dust, or as bars spiked with flavours such as Kerala black pepper and nimboo sherbat. Ice cream has become a vehicle of creative expression, laced with beer or imbued with white chocolate and sour cherries. While most of the fun is being had in Western-style desserts, a couple of restaurants have even been playing around with the textures and presentations of local favourites like jalebi and kulfi.

“When I came back to India four years ago, it felt like every restaurant had the same pastry chef,” says Pooja Dhingra, owner of Le15 Patisserie. “Everyone had the same five desserts – blueberry cheesecake, chocolate fondant, etc…now there are so many independent pastry shops in the city, you have to do something to stand out. Lately, customers placing orders for cakes ask me, ‘Can you make something that no one has tried before?’”

Desserts are also easier to fool around with because they’re not the main event of the meal, but an additional indulgence. On the one hand, diners tend to have a greater expectation of satisfaction from their main course, or have presumptions about what a truffle tagliatelle or a tikka masala should taste like. On the other hand, they need to be convinced, after they’re almost done with their meal and close to being stuffed, that dessert is exciting enough to linger over or is worth the calories. Classics are now cliches. “Even the West has moved away from classic desserts,” says Kelvin Cheung, chef at Ellipsis, where in the last few months people have been dropping in after meals specifically to have dessert. “Head chefs are becoming more involved in pastry. We’re not there yet [in Mumbai], but we’re slowly changing as well.” A little over a year ago, Cheung had introduced a bacon and corn flan with chocolate mousse on his dessert list, but it didn’t take off. “If I bring it back now, I feel like it would sell,” he says.

In many ways, chasing perfection in the classics is also a losing game in our city. We just don’t have the quality of ingredients (flour, butter, milk, chocolate) or the climate (low levels of heat and humidity) for good pastry, even if we have the skill. (Dhingra said that she was the only Indian student at Le Cordon Blue Paris in 2007, but now every class has about five Indian students keen on perfecting pastry.) Also recently, importing ingredients has become tougher owing to new laws and regulations, so even if the posher restaurants had access to French butter or Italian flour, they’ve had to find other means and routes for sourcing them or to adjust their expectations. A paucity of imported mascarpone has meant that Serafina’s bestselling signature tiramisu has been edited off the menu. It will be replaced by the more easily managed fried sweet ravioli in a couple of weeks, says Harjeet Singh, general manager of umbrella company Global Kitchens. “We just didn’t get the same texture with Indian mascarpone,” says Singh. “But people are becoming more adventurous, so I won’t be surprised if our ravioli joins our panna cotta and tiramisu in sales.”

It’s easier to put a spin on a classic and not have well-travelled diners complain, for example, about how the New York-style cheesecake at a Bandra restaurant is not up to scratch compared to the one they had in Times Square. The trick is to have something a little familiar as a point of reference and then to throw in surprise flavours and textures. It works as well for a paan macaroon as it does for a ghewar cheesecake. Zorawar Kalra – whose Masala Library by Jiggs Kalra is one of the handful of restaurants that plays around with Indian desserts in the city – says that their bestselling jalebi caviar with rabdi keeps flavour in focus to provide familiarity. Thus the jalebi tastes like jalebi even if it looks like caviar and has an amplified crunch.

MasterChef, macaroon-making classes, and increased travel by Indians have all played a role in convincing us to try what at first sounds weird. “When I first started serving chocolate ganache with beer ice cream, or beetroot red velvet cake with orange-ginger ice cream, customers would ask me, ‘Are you sure we’ll like it?’”, says Manoj Shetty, head chef of The Tasting Room. “I’d tell them, ‘If you don’t, it’s on me’.” These days, diners ask for scoops of the ice cream by itself, and ten beet cakes get sold per day, no convincing or comp-ing required.

TREATS FOR AN ADVENTUROUS TOOTH

The Candy Cake at La Folie

87 Chapel Road, Rose Minar Annexe, next to Mount Carmel Church, Bandra (West). Tel: 2643 4441.
Dehydrated porcini mushrooms are steeped in milk, which is then used to make the crème anglaise custard that becomes the ice cream. Toasted porcini dust is stirred in for some serious umami flavour in this savoury-sweet treat. Rs120.

Roshni Bajaj Sanghvi is a Mumbai-based food journalist, a contributing editor at Vogue magazine, a graduate of the French Culinary Institute in New York City, and the restaurant reviewer for the Hindustan Times newspaper in Mumbai.